I don't think that Wrighty's sick
Nah cuz I think Wrighty's shit
Why do all these grim emcees wanna ride his dick?
I bet the salmon swami ride his shit
You ain't grime, you're a lie
You retire quick, your dreams over, it's time to quit
You heard them bars and you mind had recited them
I bet you'd like to bite my shit
You wanna claim I'm a crackhead?
You'll get popped like a blackhead
Bat's got bars that could take them back when
Sprayed him like I'm aiming with a Magnum
Face it I'm the favourite, they gon' rate it
Sprayed him like I'm aiming with a MAC-10
Stop claiming you match us
Shadow would smash it with an Australian accent

Just got in from Tokyo, rep for thе year, that's 100K
Service apartmеnt, staff all 'bout
I just sit around scratching my balls, they do what I say
Taxi right this way
K, how you living?
Tour sold out but the cash all missing
Half of it goes to Chill and your manager
Other half must be the shab you piffing
Lad you tripping
Can't tell if it's your life or cash that's a funnier joke
No money for soap, gross, living with mummy at home

Stop acting hard, you ain't had beef
You grew up as rich kid but you wanna act street
His dad owns a rugby club
But the son was too fat to become an athlete
How you gonna catch me?
You're an old cunt, ain't nothing but a has-been
But he hasn't been shit, you're the epitome of a wack emcee
Fuck off
Oh, and you look like the Michelin Man
On insta I burned you with a freestyle
You 'bout to find out what happens when the Bat'll spit in advance
I don't think you're the man
What, you think you can win? I don't think that you can
Think you're in a bit of a jam
You're an old cunt, stop talking shit on the 'Gram, gramps

Nah, I ain't tryna hear a single fucking thing you say
You still live with your mum cunt, you sleep in a single bed
I ain't lying cunt I seen it, it was in your set
Right in the background, you filmed it, do you need your meds?
Evil trends, I start em, Arson, scars and bleeding heads
Fad force, end I part em, laughing, fuck em I don't need no friends
Brrrrt aye look out it's the coroner, said he agrees you're dead
Back in your hole dickhead, back in your whole dickhead

He says I rap too fast, I'll slow this down for the idiot
The place that I come from ain't too lovely, that city is insidious
He grew up as a rich kid in Brisbane, what you think that he really is
You grew up as a rich kid in Brisbane, I think you're a little bitch
You don't wanna try 'cause I'd die for this rap shit
Why would you clash this?
That's like catching a ride hitchhiking with Ivan Milat
I'm driving him batshit
Kid so nice with the raps
I'm rewinding the track like I'm writing it backwards
Time and the practice
Got not time to relax, no time for your wack shit

You could never be in the league that I'm in
Heard L-Geez and you started rhyming
You sore son and I'm big boy real
And it broke your heart that you can't deny it
You look like Martin Bryant if he never got started firing
'Cause the gun jammed and he started crying
Cunt you should fuck off back to your retarded island
You're as Tassie as Tassie can be
Step mum's Jacqui Lambie
Every little dead shit from your dead shit town
It's all one big happy family
Yeah they're all related 'cause they fornicated
Dads love it, daughters hate it
In your town that's where all that fuckin' incest porn gets made in
_____________________________________________________
ROUND 2

Top boy spitter in the game, that's me
Me losing to you? that's eh

Fuck about your crew that's nah

You having a shower this week, that's nah
Fuck off
You thought you'd get under my skin
Just by saying I'm fat, you wrong
Tokyo, I'm am the aka the katsu don
Fat boy, bust out my shirt when I beast up
I put that in my own song
Crack your skull, make me a bowl
That's where you get wombat stew from 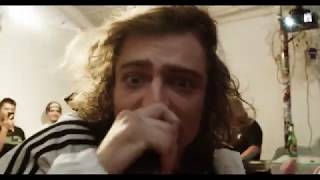