I got so much trouble on my mind
Refuse to lose
Here's your ticket;
Hear the drummer get wicked
The crew to you to push the back to Black attack
So I sack and jack, then slapped the Mac
Now I'm ready to mic it
[You know I like it] huh
Hear my favoritism roll "Oh"
Never be a brother like, "Me go solo"
Laser, anesthesia, maze ya
Ways to blaze your brain and train ya
The way I'm livin', forgiven, what I'm givin' up
X on the flex, hit me now
I don't know about later
As for now, I know how to avoid the paranoid
Man, I've had it up to here
Yeah, I wear got 'em going in fear
Rhetoric said and read just a bit ago
Not quitting, though signed the hard rhymer
Work to keep from getting jerked
Checkin' some ways [Ways
To way back in the better days
Raw metaphysically bold, never followed a code
Still dropped a load
Never question what I am, God knows, huh!
'Cause it's coming from the heart
What I got, better get some
Get on up, hustler of culture
Snake bitten, been spit in the face, huh!
But the rhymes keep fittin'
Respect's been given, how's ya livin'
Now I can't protect, a paid-off defect
Check the record and reckon an intentional wreck
Played, off as some intellect
Made the call, took the fall, broke the laws
Not my fault that they're fallin' off
Known as fair and square throughout my years
So I growl at the livin' foul
Black to the bone, my home is your home
But welcome to the Terrordome

Subordinate terror, kickin' off an era
Cold deliverin' pain
My '98 was '87 on a record, yo
So now I go Bronco
[Oh Chuck, they out to get us, man!
Oh-oh-oh oh-oh-oh Chuck, they out to get us, man!
Yo, we gotta dust these boys off!
Crucifixion ain't no fiction
So-called chosen frozen
Apology made to whoever pleases
Still they got me like Jesus
I rather sing, bring, think, reminisce
'Bout a brother while I'm in sync
Every brother ain't a brother 'cause a color
Just as well could be undercover
Backstabbed, grabbed a flag from the back of the lab
Told a Rab get off the rag
Sad to say, I got sold down the river
Still some quiver when I deliver
Never to say I never knew or had a clue
Word was Herb, plus hard on the boulevard
Lies, scandalizin', basin'
Traits of hate, who's celebratin' with Satan?
I rope-a-dope the evil with righteous, bobbin' and weavin'
And let the good get even
C'mon down [C'mon!
But welcome to the Terrordome

Caught in the race against time, the pit and the pendulum
Check the rhythm and rhymes while I'm bending 'em
Snakes blowing up the lines of design [Would you join me please in welcome-in-ing...
Trying to blind the science I'm sending 'em
How to fight the power, cannot run and hide
But it shouldn't be suicide
In a game, a fool without the rules
Got a hell of a nerve to just criticize
Every brother ain't a brother
'Cause a black hand squeezed on Malcolm X the man
The shooting of Huey Newton
From a hand of a Nig who pulled the trig

It's weak to speak and blame somebody else
When you destroy yourself
First, nothin' worse
Than a mother's pain of a son slain in Bensonhurst
Can't wait for the state to decide the fate
So this jam I dedicate
Places with the racist faces
Example, one of many places
Greek, week-end, speech, I speak
From a lesson, learned in Virginia
I don't smile in the line of fire, I go wildin'
But it's on bass and drums, even violins
Whatcha do, getcha head ready
Instead of getting physically sweaty
When I get mad, I put it down on a pad, huh!
Give ya something that ya never had
Controllin', fear of high rollin'
God bless your soul and keep livin'
Never allowed, kickin' it loud
Droppin' a bomb, brain game, intellectual Vietnam
Move as a team, never move alone
But welcome to the Terrordome 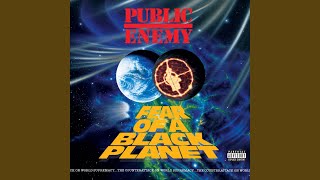 Public Enemy – Welcome to the Terrordome