LYRIC
Figure Me Out
Tia Carys

Wait, keep a couple seconds
Had to save that P just to get that pounds, rounds
Definitely wanna sleep when I touch down
Way too late to be making sounds
Pre-made me then I'm out
So I'm squatting in a shower
Scotch in my system now
My Tinder missed with that 9 to 5
Fell asleep, obscene, so I missed him
Pissed, that's
In this position I'm in this position
All the delicacy in that bag taste so fucking delicious
Erudite, tell me what's that all about?
They asked "How many figures?"
I tell them "Figure me out!"
They all wanna see her, pree her, dream to be her
Take her out to dinner, figures thicker than a stripper's tipper
Dealing with that woman, with Africa, still in Europe
Materialistic, no no, no no wouldn't
Solely giving them the boot
African-English dilute
So I can have my babies wid dey curly hair with any dude
So my babies get their mumma's hair and attitude, oh
All of these roots, gotta give my gratitude

T'ink about sex or but I grew up
My attitude stinks so they always wan' sue her
Heard that rumour sooner
Thought they knew her
Untrue, those intruders, yo
Gossip aisle, tell me what's that all about?
They asked "How many figures?"
I tell them "Figure me out!"

Wait, people hold obsession
Had to mention me just to get that clout, clowns
Counterfeit on the TL, see them in real and I deal
Wow, I've got that swaggy afro fusion kinda sound
But I can bop it, spin and twist it back around
Peter Piper picked peppers and got his accolade
Beat the pussy, I'ma do the same, emancipate
I'd normally be the anomaly, tragic, ayy
At least I'm topical
If they don't give it to T, they'll never give it to you
Somehow they'll alphabet you, they go get their V from a fluke
Arse kiss it, lick it, hit, he did it, no giving out
Then they asked "How many figures?"
I tell them "Figure me out!"

Yo, branching out like 'Which bank can support the income?'
It's a big one
And I can't book appointments like it's fiction
But I see the advert, bank alert, I'm concerned
And then I pulled my account up, saw the figures started to flirt
I dropped those verses, not nervous
Giving gyal a purpose
Now my cervix hurts so I've gotta piss a spout but
Forget the knickers
Besides pissing a river, they asked "How many figures?"
You tell them "Figure me out!" 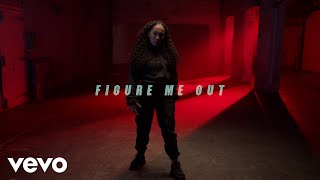 Tia Carys – Figure Me Out