LYRIC
CiJanai
That’s How I Feel

30 inch matching my shoes, And that gotta match with my bag
If I walk in the room wit yo nigga, know you ain’t getting him back
If I ain’t in Atlanta, then im overseas, you already know where I’m at
I play this song when I look in the mirror, you know how im ready to act
That’s how i feel

Still running with the same friends I been hanging round since I was fuckin five
Any hitta talking down on me bout some wack pussy, know he really lied
If I call Ya nigga, on the second ring, he gon pick it up, it Ain’t no decline
Run up on her, take her cap off, make her brain splatter, that’s a open mind
Been closing deals, been eating good, hitta go spark up a blunt
These bitches be claiming that somebody know em and thеn gotta walk through the front
Look, you a joke
And girly I ain’t laughing with you
Like sеriously? Bitch is you mental?
I could go cop a Ferrari tmrw while hittas is fanning me, riding in rentals
Oh, is you crying? So what, you need tissue?
I don’t give a fuck, so let me continue
That’s how I feel, Girl you wanna go bark on the net but for music, can’t pick up a pencil
She be in the studio, blank
Sucking and fucking for beats and some of that dank
She checking but ain’t on my rank
Ain’t no savings cause I am the bank

Hood bitch with expensive taste, eat Hibachi inside of my Tesla
They only heard I get Buck wit the beef, cause they know that a nigga would never
Main nigga can’t even get a side chick
On the gram, I dare a hoe to try it
With a face so pretty and an ass so fat, if the nigga say no, he lying
He want the Cat like Doja
You ain’t spending, i ain’t coming over
I made him pay for my rover
Then dip, i ain’t dealing with closure
I got these rappers here thinking they fucking with me
Know some hittas off Peek that’s gon clutch it for free
If you ugly, then bitch you ain’t running with me
I do what I want, they ain’t cuffing the queen
Glock on me, that’s cause I stay wit a shooter
I’m speeding through traffic, i can’t do the Ubers
Turn yo girl up like it’s Lollapalooza
He ain’t getting racks, that lil nigga a loser
So out of the way, man you can’t even choose her
Titties on fleek, like a bitch work at hooters
Swap wit yo homie, the other one cuter 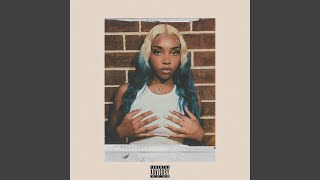 That’s How I Feel – CiJanai