Tarzan:
Me next foe close? One attack from the front
Come out web Spider, Tarzan is Kraven a Hunt!

Great responsibilities, much to debate
But first, me protect Jane from another red-butted ape!

Swinging down to your level is a radioactive stunt
To defeat the next cheetah, jumping between red and blonde

‘Fore damage happens, better crawl back to your friendly neighborhood
The next headline you’ll get is: I don’t feel so good

Bringing heat to the jungle, I lead in fights and on the beat
But I can’t fix an ego that’s burning down his own family tree

Spider-Man:
I’m the champ over this chimp chump, with such feral ape-parel
Always spitting Looney gibberish, a Tarz-manian Devil!

Another beast without a beauty, this disgrace to homosapiens
Has only shown Africa how to shipwreck relationships
You try to move on, climbing up, explore the jungle’s sugars
But you can’t piss out filthy mental torture memories in bushes

Went from racist to tasteless but I’ll stick to the facts
Shall I call in Venom? I know you prefer to beat the blacks

Tarzan:
You seem frivolous, villainous, I think I’m wasting my time
So pull your wisecracking and drop the mic harder than your love life

What are you doing on the rooftop? You’re past the high placements
Take the subway, if you’re chasing the Amazing’s ratings

Spider-Man:
There’s a thousand jungle tales, and when their tracks became reusable
Mowgli’s balls dropped; they called it Tarzan the Musical!

Woow! I’m a reflexive hunter! So best protect your mother!
However at the end you will get chained and shipped to others!

You must have been disturbed, out of your inner world
You’re Burroughs words? Just run away before the dinner’s served
Keep mood-swinging while your family’s falling apart
One shot and my stringshot will be in your heart

So no matter what universe, the spider has the last words
To a dude who puts belief in evolution working backwards 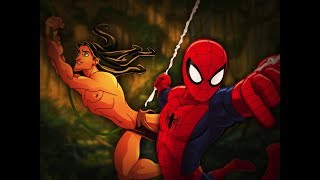