LYRIC
Return Of The Soul
Stro

I used to be a nuisance, but they been acting new since
The youngin started winnin', my biggest fear is losing
This game is kind of stressing, could leave you in the medic
That's only if you let it, it's all about them $'s
Dollar sign support, what else, eh, speculation
Clock the first, but without the second your time is wasted
I've been patient-lee kicking, waiting for credit
But by the time they give it, it's really like forget it
The game ain't fun no more, wack as ever
From rugged raw stitching to Givenchy and leathers
And everybody docking over nothing
Grabbing their surfboards when they hear:
'Yo, yo, the new wave is coming!'
I've always been different in this world
Never the type of kid to say there is no God
After listening to Earl
People share opinions like photo's
You better put your face in the books, man
For it get took and turned into a app
When you ain’t got no wi-fi
Money in your piggybank trying to be fly, huh?
But right now it’s kind of looking like haza
Need rep like Scarface ‘fore I die
Okay, I’m reloaded, the chosen one who's reloaded
My old mixtapes is still potent
I’m off the factor and they still voting
So take note and, prepare for return of the soul man

Aids kills, word up, respect this, America is dying slowly
Keep the killer bee's close to me, that’s what it's s'posed to be
Carry the real like groceries, but it’s the grade A
Trying to get away from these ghetto ways
Sugar hill the gang, that paved the way to get us paid
So now I’m in the studio working on art
If all you listen close and you could see me painting myself in the corner
Street life ain’t the life to live
So I go hard with rap just to make it easy for my kids
Communicate through these ad-libs
Don’t see the big pick, the contact, the dude selling glasses
In the corner, vocals in the beat team up
Introduce the air, the emphysema
Fame will leave you breathless
Media throw shots like catch this
Put up walls with asbestos, It could drive you crazy
But put gas in your car too
Once you made it they get animated like the car too
Who’s real? Who’s not? Sort 'em out, no hits, no hit ups
Labels know what I’m talking 'bout
Well I guess I’m on my dolo, kick hard flows with soul yall cats Manolo
Huh, solo be the logo we in here trying to shine like soul glow, stro 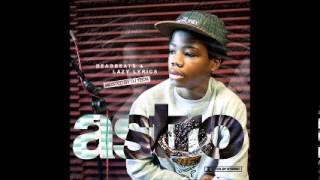 Return Of The Soul – Stro