Somebody told me
Nobody promised me that the broken are gonna be healed
Oh, but I don't, oh, but I don't believe

Thank the heavens for Nottz on production

Yeah
Periodically idiotic this odyssey
Call it the dichotomy of the warrior and god in me
Part of me gotta be Shaka Zulu, this prophecy
Of prophets introducin' me properly, required the keys
I believe I'm honestly an anomaly rockin' these
Monster strings orchestrated by Nottz
The greatest aviators of your playlists surround sound
Avengers and the capers of them planes, trains, automobiles
Ships, the sailors cross seven seas
Less than these diaspora cheddars, please
He mastered the expertise, still after the extra cheese
Still level the mezzanine, your balcony never seen
This valkyrie told the team
Operation fire after fuhrer, the author who called the order
Sort of synonymous with the simpletons meant to slaughter
Sniper that saw you in the scope
Traumatic disorder of people positioned poorly
Peasants, peons, importers
Reminiscin' the yesteryear, but my thinkin' is forward
I was at one with this addiction of rippin' the mic to
So this is my escape from a business, bottoms, and borders
Deep waters, when we drew straws always the shortest was mine
Over time the inner pain wasn't pacified
The hunger inside never gets satisfied
The hunger inside never gets satisfied
The hunger inside, yeah, yeah

You gotta believe it, you came to achieve it
The hunger

Yeah, yeah
Modules been magnified, mental militancy
Intently watchin' his timepiece, dues paid diligently
Eventually runneth over
Half-empty cup of venti uppers, in the echelons is my songs
Buckle in these safety belts
What you felt when we first heard "I Used To Love HER"
I want that feeling again, I hope we soon discover
Another in common with common thoughts that's blacker than the
Used to wrap that army jacket linin' linin'
Think that I was Nas sometimes when we was lackin' edibles
Blamin' the federals, gettin' yearly doses of medical shots
Those on the block totin' Glocks on the pedestal
Mesmerized by 3 Stacks raps, dreamin' of Ferris wheels
He was talkin' ceiling fans, that's feeling in the gut
The hunger inside never get soothed enough
Call the bluff for the so-called
Response to the flaunts of the masculine debutants
For feeling wants and needs of societies, all he wants
They killin' our black teens, deferred dreams haunts
A Lauryn ambiance when our circumstance breathe 'pon
to pumped fist, rockin' hard card
Until we on the march side of Bullhorn battle cries
Realize, the hunger inside never gets satisfied
The hunger inside never gets satisfied
The hunger inside, yo, yo

You gotta believe it, you came to achieve it
The hunger 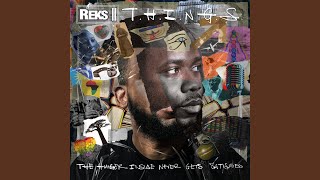