Insane Clown Posse!
ICP! about to take you way back! way back that is, to Vernor!

Violent J
Posse, yeah!
Me and Shaggy 2 Dope in the home away from home
In the black bucket hearse with the rusty grill a chrome
Pickin' up the homies, we get em one by one
If you ain't psychopathic ryda boy you cannot dump [bump
Everybody's lookin' if you jealous turn around
Fuckin' with them leathers got us hoppin' off the ground {*Honk*

We getting good grip from the 50 series tires
The alpines bumpin' but I need the volume higher
'Cause the 808 kick drum make you want to get some
I got a scrodum full a balls I let your girlie lick them
Every time we rollin' Twiztid's gotta roll a joint
I almost died from inhalation comin' back from Cedar's Point
Hookers and zombies in every direction
Lookin' for the wavin' for some action
The wagons kinda crowded though
????????
Jamie tryin' to keep it steady with the greeny on his lap
Rude Boy wasn't lookin', we hit a crack head
Flippin' off the windshield, the motherfucker's dead
Zombie cut in half, look out of regret
Insane Clown Posse rippin' up shit
Woo! Woo!

Runnin' down baseheads, seven more scored
Half an hour later we was getting kinda bored
Jumpsteady's dangerous, Dougy is 4 Rilla
My homie Shaggy 2 Dope is the bitch hater killa
Billy's on the left side coughin' helly
Leavin' haters lady crawlin' pickin' up they teeth
Tom Dub is the skinny guy
People think he's funny
But he didn't even know tonight he comin' back bloody
Cruisin' Del Ray boy these streets is cold
Cigarette lighter broken window stuck unrolled
Rippin' Michigan we saw thugs
Me muggin' hoes shoppin'
Distributin' drugs
Hittin' 3 and 7 and that ass just dropped
Squeekin and we
But the wagon don't stop
Michigan
Rudy broke left, Jamie shot a Verner
It's time to get wrecked
Junky on the corner, need a box of shoots
With a rebel flag and some cowboy boots
The closer that we get, the clearer it became
It was Kid Rock yellin' "What's my Name!?"

Now cruisin' down Verner
My wheels spin slow
Runnin' with the hatchet is the only way to go
Some girlies by the Carnival was lookin' for a ride
We tried to pick 'em up
But we had no room inside
We put em in the trunk, we put em on the hoods
Some sat up with the Rude Boy and puffed on his wood
Our crew is gettin' bigger, and there's way to many freaks
The muffler's draggin' and the tailpipes weak
Now these hoes are gettin' hungry
Monoxide's treatin'
We stopped at Xochimilco for some Mexican eatin'
The restaurant was closed, this ho was like "Damn it."
She said "Go back the other way we'll stop and eat at Seven."
Now I finally see the place, it's a little run down
But they got the best Chilly Cheesy in town
Faygo on tap, any kind you choose
After midnight though the place is bad news
And didn't even
This ho from another crew she picked it up and used it
Her boyfriend's trippin' and jumpin' on her case
My homie Billy Bill had to bust him in the face
We never like a fuck, who beats on his girl
If ya don't have a game, then .. leave our world
Ain't nothin' to discuss, the bitch slept with us
She fucked everybody now I hard she lives with Russ
Now I'm runnin' with a hatchet, and you walkin' with some dudes
The Psychopathic Family is givin' you the blues
Hate us all you want, 'cause we don't get upset
Insane Clown Posse, bitch represent! [Come on] 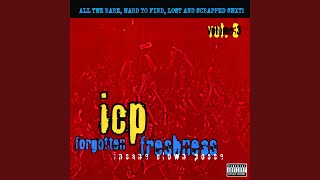