[I got Hitman on the beat
[Mommy, India got the beats]

What, you wanna do somethin'?
Tryna put some shit to bed now
Whip out, hop out with Glocks
And we be aiming at your head, huh
Bitch, y'all wan' do something?
Lil Top like to see red, huh
You wan' fuck 'round with the don dada
We gon' red dot him, we gon' bedrock him
I'ma heart-stop him
With this killin' shit, I'm the murder doctor
I got one chopper for his nine partners
When I finish, whole city heard about 'em
Ridin' four deep 'round where they be
In the back seat with a dirty chopper
Screamin' fuck the law, we gon' kill about it
Fuck the music, nigga, know we drill about it
I'll use it, nigga, know this 40 on me
I'm a real Blood, get rid of homie
Kill that bitch, make the critics pay him homage
Make them killers drive when he say he want it
At his trap spot, we gon' creep up on him
Oh, you chose somewhere scared now
Talibans all where that lead found
He was wrong, why he left him dead, huh
Lil Top, I'm too ahead now
Inside my scope your head found
Demon shit, illiterate
Sip dope that's not prescribed from out of styrofoams
YoungBoy like to blaze, no hand grenades, we get your head blown
Reaper shit, this Draco on me
Bitch, I could cook, just work this trap phone
Blackberry, confirm shit, I can get his back blown
Four-five, this Herm shit, but you know my bag strong
You slime enough to fuck a nigga, you slime to bring a bag home
I told you not to trust these niggas, bitch, you know you dead wrong
On that lean, you would think I popped a bean, I don't turn down
Killin' scene, blood on my Soldier Rees, somethin' got burnt down
Switched RPs and the Ks turned to machines, I'm like, "Who playin' now?" [I'm flexin'
Lay the whole clan down [How you want it?
Leave him with his pants down

[Shawty sayin' call back 'cause she found where they stayin'
We gon' leave the phones
[Load up, she'll take us, we'll be scopin' out the scene
Bah, bah, Jiggaboo, stop cappin', you know that headshot was me
[We'll fuckin' spin again and see who got good aim
Bro, creep down, sweep up
Should've had some cleats, thug
Pussy bitch can't run from us
We gon' chase you down, we gon' put you up
YoungBoy, AI, Lil Top, bitch, I'm a big thug
You in here, then tonight you just might die if you ain't here with us

Man, my mama know I'm a demon, I don't give a fuck 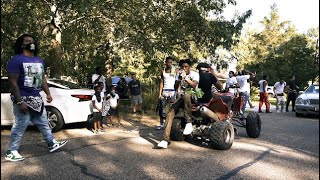