Because bloodstone is dark crystals of green within green
Because it has splashes of red exploding, it is Scorpio stone
The bloodstone has the feeling of a heavy black-green sunless forest, spotted with bursts of violence
Just as Scorpio's dark, passive exterior is illuminated by sudden flashes of fire
The bloodstone hides a somber beauty
Just as Scorpio's profound feelings and vital soul are concealed behind a veil of control
But the depth is there, it must be sensed and felt
And Scorpio has this to remind him that
If one hides himself too well he is either misunderstood, overlooked, underrated, or what is worse, feared
Even by those who would want to have loved him

Color Scorpio deep red
As deep red as passion is red, when it is heavy in the blood
As deep red as the badge of courage when the battle begins and the weak must be led
For Scorpio is the physical fighter who must rise above fear, and prevail
But you, Scorpio, must not forget the timeless cliché that as you live, you die
And usually by the thing you fear most
Live by the sword, and that is how you perish

So, Scorpio
Pry into the seven secrets of life and death
Conceal yourself in the dark-green shadows of the bloodstone
Follow your deep red path to victory
There's one thing to bear in mind
It may have taken seven days, seven years, or seven million millenniums to build the world
With our new power, it will take 7 seconds
And one act of vengeance to destroy it 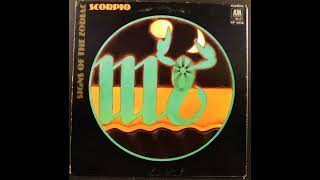