Yeah [Suu
Let's take a modern day stroll [Woah
This is the modern day, hoe
Last time I checked, we were runnin' the globe [Go
I'm 'bout to go fingerfold
Two knock two times, it's a brick at the door [Two time
Somebody blowin' up lil' mama phone [Brrt
Lil' nigga just come get your hoe [Brrt, brrt
I'm talking Patek on the wrist [Ooh
Baguette go and dance on a bitch ['Guettes
You know that bitch too thick [Yeah
You can't even see the pants on that bitch [Bad
The way that we spinnin' [Yeah
Spinnin' in hellcats, goin' Taz on a kit [Spin
She wanna pop a G6 [Pop
She suckin' on dick until six [Yeah, еugh
I make a movie, I'm going Michael Bay [Yеah
Huncho the sensei ['Cho
The way that I'm moving, we going motorcade
Move the tactical way [Tactical
I need the backend this way [Ooh, backend
Somebody packin' this way [Packin'
She get to clappin' that way [Ooh, dat way
You don't got the answers like Sway [Yeah, Sway
Fuck it, I'm coolin' [Woo
I'm in the coupe with the top and I'm wavin' a coolant [Wavin'
Switch and go doolie [Yeah
With a bad bitch and I play with her mind and her coochie [Coochie
I'm still Ratta-toolie [Ooh, woo
I got a pipe that's so big it look like Chattahoochee [Whip
We not the Fugees [Yeah
I'll go foolie if a nigga try to Three Stooge us [Uh]

Where the fuck he came from? [Where?
When she see the Don she givin' me some
The 'Rari came red like a plum [Red
The streets like the sound
I gotta ride with a drum, keep smoke in my lungs [Smoke
Arabian bitch in the passenger seat
Like she got a illegal bomb [Bomb
Baguette, the charm, rainbow, Daytona
I Lucky Charm the arm [Charm
That bitch is borin', oh, that's your main?
Come get her, can't help it, she gone
Count up a bag but know we ain't tourin'
If it ain't my money, I think it's annoyin'
Pop me a Perc' [Perc'] with a cup full of purp' [Purp'
When I hop in the 'vert with no key and I storm [Skrrt
BB the belt and I VV the arm [BB
Hop on the P-J, go visit the farm [Phew
Indoor and outdoor, whatever you want
Put that lil' boy 'cause my money grown
I know some niggas got rich off of zones [Rich off of zones
Made double digits off Apple iPhones [Brrt
Throw that shit on, I get fly like a drone
Put dick in her once, she won't leave me alone [Leave
Kapital bones, the wallet is chrome
They say that the opp' been lovin' the song
Eat up the dab when they come around
And then go and put everything we got on
If I got a plate, you know that he ate
I'm too blessed and one thing I can't do is hate [Nah
I like what you what you doin', just humble yourself
And know we the ones that opened the gate [Open the gate, uh]

Big body Urus [Big body], fast and the furious [Vyoom
Grippin' my MAC, watch the rear of the mirror [Who dat?
Baguettes on my neck, on the Lear', I'm superior [Lear'
Two-fifty each ear, what you say? I can't hear [Huh?
Shoot dices, my prices, they lower than Sears [Low
She ride the dick, speed it up by the gear [Go
Dropped out of school 'cause I didn't wanna hear [Nah
I was thinkin' 'bout makin' a M every period [Yessir
Got my shit out the block [Block
Seventeen, hot, tryna plot on the guap [Hey
Fuck that bitch, I had to go and get a knot [Knot
I was on the block, ain't knowin' 'bout a yacht [Who?
Stick in my crotch, Audemars watch [Bah
Burberry shots, I was curvin' a thot [Curve
Got baby KK a Birkin, why not? [KK
Bought a AK, fell in love when I shot [AK
We beat 'em in dough [What else?], we beat 'em in hoes [What else?
We beat 'em in clothes [What else?], we beat 'em in Lambos on the road [What else?
Hold up my wrist, it got rocks like Hov [Hov
These boys are my kids, don't talk no more [Shh
I'm stuffin' dick in the back of this hoe [Huh
My Rollie got Skittles, you taste the rainbow [Skittles
Kick down the door, lay 'em down, Kurtis Blow [God
Cop on the low, in the Nawf, it don't go [Nah
Bad, but bitch ain't got nothin' to give [Shawty bad
I'm the dad in this industry, I got some kids [Dad
She wanna fuck me, I know, I can see it [I can see it
Just for some clout, niggas jump off a bridge [Clout
I had the drop on the opp' and we slid [Drop
I don't be gamblin', my dawg, that's the wig [Wig
Make the money eight ways, I'm a squid [Eight ways
He tellin', he yellin', he work with the pigs [Woo] 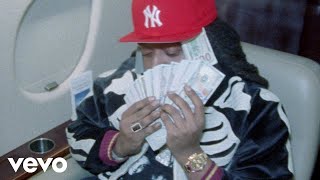