Dumb is official, rinse your eyes out with it
Vision gets in line with shitty pics
If you don't watch it, lies'll fill it
Leech your mind, could be the final piece of wisdom
In your life and then you die without a vision
Never listen, now you're blind
A type of lobotomy numbin' their mind'll be dominant
Fight it get up in the right be lockin' it
Fight 'em again and be enemy-
End up a God if you're sick of the mob
And you're breaking a regular way to get off
End up on top, win or a loss
Enter phenomena made of an odd thought

Thought be liftin' mind and gets yo body with it
Watch it give you life in doom and shine
And boost a virbe or two
Not too big and wise of you to line with stupid
Stop it, dude it's psycho food, your mind'll poop
Dynamite up in 'em and they might go "boom"
Ignite your group, not your groove but you might go too
Stop it, douche your minds on loop
Knock all proof and you ride on through
With a bind on truth, in a cockeye move
Ain't no eyesight true when you buy lie soup at the price y'all do
What if you don't wanna buy the poo?
Wind up uncool, sign you might boom
Ride on my tune, I don't mind you
But I feel I'm gonna hate it when you enter with a group
Feel I went ahead 'em all Poof, into my groove
Into rhyme-Fu, and I find truth, what about you?

Dude, I'm 'onna gun it, finna get up on a minigun
I finna gun 'em any kinda round I'm gonna feed 'em
Any guy I'm gonna heat 'em hit a monty with a bid up at a height
I'm into freedom ain't no money woulda freed 'em
But I hunt it when I find it, been a hunter with no meat again
No butter when I beat it, made of honey wanna eat it?
Bit of yummy and I feed 'em anybody wanna piece?
Peace I mean, not piece, peace out beast
Chi might free, reach high breed
Me find dream I think I'll preach
Reach out free my key, teach y'all each y'all G's
We rout deep, seek out we shall reap
Vini vidi vic' all sheep

Eenie-meenie-miney-mo, catch 'em when they buy the role
Independent mind'll go, when you go to find a role
Ain't nobody independent but he wanna guide 'em all
Why'd he wanna guide 'em and he ain't even in mind of pro
Any kinda motive ain't about a bro, motive with no honor
Wouldn't get up in a honor roll he end up at the bottom
And you caught him in a pot of faux

Rid of any enemy to flow, wait a minute
Ain't nobody in here with a code
If I gotta put up with a hater gonna blow
Wonder why they hatin' when they enter with no mode
When I'm in a fit I'm gonna hit 'em with the venom
And if he don't wanna end up as a foe, better get a motive into honor
With no motive in the right he finna end up at the bottom of the row
Hope is always open, don't be dopey
Go free you Chi, ocean's so deep, pros keep rollin' so keep your beat
Old folks know roads hold keys
Your dreams almost home don't fold go blow your own breeze

Windy when I'm in it, gonna benefit I bet I get a win again
I'm better went ahead 'em ain't no venom in a hater
Gonna matter when you enter with a head up in ahead of any hatin'
What a way to put it Matt, put venom in rap
Put up with the venom and you end up on track
Feel I'm on a ride if anybody wanna getup on it
Finna get a fine you been a pawn again
A hater wanna get 'em off task
I'm fast, ain't nobody gonna beat it when I heat it bet I eat 'em
Any hater went ahead I'ma defeat 'em
But I hate again I'm petty wanna end it
But I can't I been a animal up in it
Gonna hit 'em when I'm mad again
I battle with a inner kinda Matt I meant a phantom
In the head I wanna medicate, a better way to handle
What I can a bit-a cannabis'll end it when I hit it
When I feel it why not hit it? Wanna end up on that

Smokin' no weed if you're dumb, hit no pot
If you live with your mom and you get up at 10
Better get you a job and don't bitch if in poverty
Bitch your dominant country be livin' so good
Don't be trippin' and takin' the privilege out here for nothin'
My poverty up in America's better than regular communist
Hop on the wagon you're wakin' the prophecy
End up inside of a communist pocket in misery
Negative vibe when you wish and be gettin' free monty
So ain't no one strivin' to win in particular
We get a prize and we ain't even gotta be workin' to win it
So ain't no more drive in a person be sheep and you end up in binds

Older man'll own it but a kid'll wanna hold it
Been a kit, a bit of fun'll be the end of what he bitch again
About I meant around a bit of hope you get a fire to win
I'm mighty when I get a bit of hope and get a minor win
You better get a vitamin and enter when you're right
You gonna find 'em in a portal good at findin' what I want up
In a guide I pray to mind again
I might've made a order for the mind to be the owner
Bet I might offend a border when I find up as a God
I'm at a height I met a bird I go to ride him and I hurt him
Any hotter would've burnin him in a fire
To win a Burdick gonna fight and beat a word 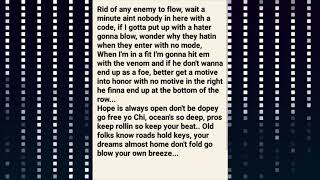