Intro
Yo, like... I don't know how it came to this, but
I guess... I had to make an album, and uh
It's my first time, and I'm not entirely sure
But you know what, here goes

My lyrical linguistic's a myriad
Magic trick lookin'-ass, shit is so mysterious
You might as well just call me Shakespearian
But I'm a high school twelfth grade, bitch I'm just a senior

Pull up on top, with that shit on God [Yuh
Someone call the cops, I don't use a fucking comma
I'm a one-man show, I don't need no drama
Bitches can't say shit when I say your mama

Ohhh, ohhh, you already knowww
How it's gonna gooo
I'm just gonna showww up!
Finish on top with a period

Ayyy yo, that was kinda good, no?
I mean, first time and all too! Kinda fire!
Turn that beat back up
Yuh
That's what I like
You know what? I'm hype
Let's get down to round two, I'm ready

Pull up all day in my Nissan
Weaboo shit, call me onee-chan
Lyrics so foreign you call this shit Klingon
Don't talk smack or your motherfucking knees gone

I'm on a roll, y'all already know
MC JC got that flow
I make my bread with this motherfucking dough
Shit is just every single fucking day bro

I got that punctuation, concentration
Mix things up with some fluctuation
That good dictation, sick quotations
Throw in some parentheses in occassion

It's adaptation, demonstrated
On my A+ college application
It's my creation, don't be hatin'
Don't be hating when this shit be playing on the station

Ohhh, ohhh, you already knowww
How it's gonna gooo
I'm just gonna showww up!
Finish on top with a period

Finish on top with a period
You don't have to lie, swear I won't be furious
People say look how clear he is
Only seventeen, but this shit is so genius

Pull up on top, with that shit on God [Yuh
Baby don't make me stop, it's my motherfucking squad [Yuh
I got hella secrets and I know you're hella curious
All I gotta say is I finish on top with a period 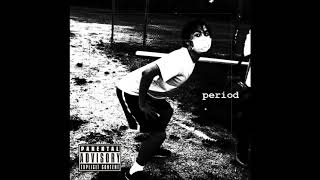