LYRIC
I'm Not You
Clipse

I keep that ziploc bustin at the stitches
Culinary chemist, I serve the malicious
To break the fiends fixes, one give you the sniffles
The other leave you with the itches
Transport airport with the Vaseline
So I can fulfill my dreams of pastures that's green
More cash then ya seen, with an Aston that's green
Me driving up fast with the lean
Zonin' family, keep youngins in them rented Camrys
Door panels full of shit and I ain't full of shit
Reckless ass, God forbid they don't crash
From the panel to the dash, it's four pounds of slab
Nah bitch, we don't believe in air bags
Cars turn tricks like them Ringling Brothers skits
Whether bitch hop out, or the Glock pop out
Ya know what I'm about, blow to ya sinus 'til the snot drop out

Whoever said birds fly south for the winter's a damn lie
Got 'em right here, and if I don't like you, the grams hide
Take it or leave it, soon as a fiend taste it they need it
Make 'em smoke it right in front of you to make you believe it
Prolly think I won't murder you the way I smile
But I'ma take a lot of shots, A.I. style
And Jada, the name is filthy, but so what?
The motherfuckin game is filthy, you know what?
My mom and my pops really did a good job
But it was the Montega and the 'caine that built me
So I could never hate on another brother
God is great, the devil is a motherfucker
When you broke but they think you got money
Crackers start showin you love, your own people act funny
I tear niggas heads off, I don't discriminate
Waves, cornrows or dreads, I will eliminate

I'm far from a noodle nigga, I stab up block reps
And turn quiet streets into hot sets
Nigga, that's funny, you say you a killer, how?
What is it, the return of the killer clown? Akhi, you put no fear in my heart
I make ya people say, "Wow, that didn't look like my man"
They flipped him upside down, the coroner did what he can
He got hit with ten rounds at point blank and point blank
Coldchain left that nigga stankin
Half static and face, I got the wrinkling, slugs all in it
I had my eyes on his mink and, I didn't give em a chance to blink
When I jogged up on em, pressed the 40 up on him shocked 'em
Made his head stand on end and like a baby, I rocked 'em
The coffin the cradle, you can't bite the hand that made you
That's the beginning of the end, and you a thug that pretends
Call Coldchain "Super Nigga," I got X-Ray vision, I see through men
And squeeze triggers with bullets that go through men

Fuck with S.P., that's ya date with death
Got bullets that'll break ya chest, no sleep like I hate to rest
I'm in the hood like its my fate to rep
I hold it down, any place I step
And I love getting slept on, cause I'm rawer than dope
Fresh out of Africa that never been stepped on
Dawg, I'ma clap at you the minute that you rep wrong
Holiday, the Ghost the main reason why your set gone
Why I love riffing 'em poor?
You wouldn't understand, cause my God is different than yours
If the world spin in a circle, I want to learn to move backwards
Kill niggas the first minute they jerk you
What you keep the toaster for? Creeping through the hood and
Shit ain't really good but I'm deeper than the ocean floor
Higher than a plane and meaner than a bull
I want ya insides out so I mean it when I pull

Rappers is talking to me as if [come on
We in the same boat I tell them quick, "No, I move coke" [uh-uh
And you and I don't share no common bond
So forgive me if I don't receive you with open arms [No
It shames me to no end
To feed poison to those who could very well be my kin [uh-huh
But where there's demand, someone will supply
So I feed them their needs, at the same time, cry
Yes, it pains me to see them need this
All of them lost souls and I'm their Jesus
Deepest regret and sympathy to the streets
I seen them pay for they fix when they kids couldn't eat [so sorry
And with this in mind, I still didn't quit
And that's how I know that I ain't shit [I ain't shit
My heart bleed but that's aside from the fact
I live for my kids and theirs and them youngins after that 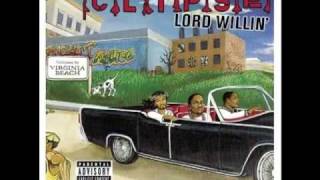 I'm Not You – Clipse