Crockett's comin' in, and he's gnashin' his teeth
I'm glad you volunteered to document your defeat
I'm the Frontier King, you're a Croc of shit Hunter
Ol' Bessy's taking shots at your land Down Under
I'm the prouder vet, marching out in my coonskin
You made your own nation cringe, the Steakhouse always wins
Just bear with me, Steve, I'll take you down like a toddler
While you pinned crocs, like the one you almost fed Robert

Crikey! We have a wild cat gone stray
Who thinks he can school me in just four days
You'd think I'd conserve my thoughts against a bird brain? Hardly
I bring fair dinkum rhymes that are hotter than a Barbie
Just go root for the home team, cause I'm ballin' to the goal
My home turf's not as dry as your barreled down flow
Remember the Ala-moment you were crowned Queen of Memphis
You can't handle my hell if you can't make it in Texas

You're the bogan hogan who was ready to take a dive
But your lines are flatter than the fish that took your life
I'll gun you down with my musket, mount your head on my plaque
Make that 105 bears, and one Kangaroo Jack

While my legacy's aging, you don't make much to repute
Disney's too wild-fired up to give you the reboot
Now, I taught the whole world how to care for nature
But even I can't teach them to love a folklore failure

Who won?
Who's next?
You decide!
GridLine Rap Battles! 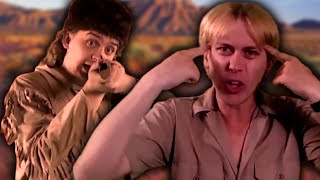