He pops bottles, pops pills, pops music, pop kills, paid the cost to get it poppin till it got real

He always said that,"He would go to the top"
Now that he got the world watching hope he knows when to stop
Gave it all he had to give it
Pushed himself to the limit
Forgot about the music now its all about image
Never had much,so you gotta forgive him
As he indulges in this world of narcotics and women
Never thought about the finish he was focused on fame
But everybody loves a star when he's falling in flames

He'd been dreaming bout this moment since he got his deal
Sold his soul for some pussy and the hottest wheels
Now he yelling,talking bout he selling million sheets
He used to watch on t.v
Now all a sudden they be catching feelings
They say they feel him,say they wanna have his children
Now he frontin like he king
But he just got in the buildin
The lights and the life and the fame
Got thousands of groupies just screaming his name
This all he ever used to dream about won't last long
Cause they bout to let the demons out

He had a girl that was holding him down
But his stupid ass thought that she was holding him down
She said,"Heavy is the head that is holding the crown"
He ain't hearing her, he happy when the ho not around
I tried to holla like,"Homie slow down"
But hes no longer underground
So he don't know my ass now
And night after night after night after night
He fucks hoes,he does blow, he gets high as a kite
He knows that its wrong, but its feeling so right
Doesn't know that he's in for the fight of his life
Its almost time for the debt to be called in
They opened up the pit,hoping he'd fall in
He didn't fall, he jumped and went all in
Now he owes it all to the one that they call'em
And that's some serious debt
His girl Yumi tried to tell'em he ain't hearing her yet 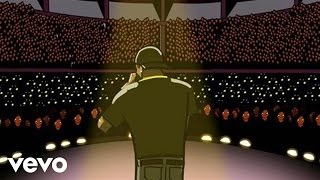