LYRIC
Detroit vs. Everybody
Eminem

Tell 'em, if they want it
They can come get that [Static
I! swear I love my city
I just want less [Static
S!ee me, they salute me
They ain't ready for that [Static
D!etroit vs. Everybody

Uh
I took a bite out the rotten apple by the poison tree
All these females need to email to make noise
And now things changin' a lot, he fuck with my authority
Then he shall see shells, but not by the seashore if he gangbangin' or not
It's simple as the alphabet, he F with me
That G shall surely see, he definitely as 'bout it
As retail fraud, he's weak, the honest gesture
The trigger finger round the diamond tester, we tell flaw with heat
The same soldier, it's me, myself and I
Ridin' round shootin' my biopic in my autobiography Range Rover
This ain't the squash beef state
You thinkin' make-up, we thinkin' Lark Voorhies face
The twin Eagles'll air his coupe, might as well ride by in an ambulance
My pair'll shoot, like skydivin' in Hammer pants
So call it sibling rivalry
Take his life; call it the unforgivable robbery
A wise man told me that holdin' a grudge is like
Lettin' somebody just live inside of your head rent-free [Real talk!
I don't got time to evict these clowns
Y'all niggas been bitches, that's none of my business, but I don't sip tea [That's Nickel
Ridin' round his block
All he know is pitfalls, that's why he always climbin' out his drop
[I got a question] Do you wanna ride or die?
[Welcome to Detroit, motherfucka!] [Sean Don]

Boy, I need no halves and halves, I want the game in entirety
Hundred percent cut; no stitches required
Welcome to Detroit, where if you get that promotion
Don't worry, man, them bullets will still be at your ass firin' [Brr, brr
I still call it safe, I would suck if I was umpirin'
Boy, I hit the beat, and just treat that shit like a diary
I'm offended if you hear my new shit and you ain't rewindin' me
Self-made, I never needed your bail or a wire, see
I'm never callin' collect, I call to collect
My homie wanted a Chevy, so I put my dog in the 'Vette [Swerve
Ahh! Plus I'm so loyal that that paper, boy, is all that I fetch
If the ball in my hand, then the ball in the net [Net
Bitch, I'm the D, can't no offense dunk on me [Me
I'm Mr. Big Shot, these hoes get drunk off me [Me
I'm over-respected
My mama gated community's overprotective
So futuristic, I'm already over my next bitch
Reminiscin' on listenin' to 50 fifty times a day
Back when tenth grade was like fifty days away
Tryna get paid fifty ways a day
Used to put fifty on the layaway
Now my closet fifty shades of grey
26, and I done lived a lifetime a few times
From futons to Grey Poupons
In church, tryna get a little savings, yeah, a coupon [God
I spit that A1 every day, I'm hittin' new primes
Now the stakes high, niggas surprised at the new lines
Takin' down my number, like, "You still ain't got a new line?"
[You still ain't got a new line?
Nah, it's the same, we been laborin' for years
I know it took way longer than nine months
But fuck it, it's all in due time
I turned a blunt to a roach, with dreams of bein' a Beatle
Don't want to, I need to, ya gotta learn to keep it cerebral
When you come up in a place
Where everyone got a piece but ain't peaceful
This is just part one, wait 'til the sequel [Let's go] il' bitch!

Tell 'em, if they want it
They can come get that [Static
I swear I love my city
I just want less [static
See me, they salute me
They ain't ready for that [static
Detroit vs. Everybody

Comin' from them streets where they thirsty, starvin' to eat
Just a step away from failin', that's why they call it the D
Arguably the whole reason for all of this honesty
Honestly no honor roll, but honored up in them streets
‘Cause I'm a Linwood nigga, them young niggas hit ya
Put a stack on your head, you'll bleed a lake on Grand River
If you think your hood harder, then I might beg to differ
Know some killers pull the trigger for a Swisher and Miller
If the blicka hit ya kisser, bet yo' ass not rememberin'
They say my city's tougher than two fat bitches scissorin'
So, nigga, I'm a veteran, retire my letterman
Have K's in front of your school, but I ain't goin' to Kettering
Cough up a lung, 313 where I'm from
Xan got me cross-eyed like Bernstein’s son
Any nigga try to copy, put a hole in his top
It's us vs. them, Detroit vs. Everybody

Lately it seems as if it's me against
The world, like it was before my life became a movie and they used to use my mothafuckin' trailer to tease me with
But I flipped that script like a refill of
Painkillers to pop the lid off that safety seal
It made me feel amazing, Navy SEAL of bravery
And if I may reiterate, I ain't even need a script
Ain't bein' conceited, but I made it to radio—eat a dick!
I still never ABC this shit
Mainstream appeal, but the skill is what made me iller
Since before they called Jay Dee "Dilla"
I was daydreamin' one day I would be the shit
And if I ever end up escapin' these streets
I swear that I would stay here still
And if I'm crazy, I'll always be real
Don't make me steal an eighteen-wheeler
Break all of my friends out of here
And take 'em straight to the Mercedes dealer
Peel off back to the same block that we came from
On a rampage too crazy for me to flip
What's makin' you think I need a switch?
‘Cause I'm Adrian Peterson
When he's ragin' and heated and
On the way to go beat his kid?
On a track get spanked like he just did
[Detroit!] I can't never leave this bitch
Sick of bein' treated like we ain't shit
But Jesus, I can see just why people quit callin' me
To do features and them cyphers on BET, ‘cause if
I wasn't me I prob'ly wouldn't
Wanna play with me neither, shit
Seems to be reachin' its fever pitch
Hundred and eighty degrees in here
Shoulder blade full of cedar chips
MC's just bit off more than they can chew
Like a face full of Swedish Fish
Or Lorena with two penises
Hateful and geniusness inconvenience
And for the record, you don't want this type of static
In your life, when I'm makin' you cling to it
May consider tryna reinsulate your windows
May be in for another crazy winter
‘Cause so cold in the D, it is
As days begin to tick away, but ain't this really
What made me into the angry bitter blonde?
But ain't we sick of bein' underdogs?
Don't make me unleash this shit, release this pit
May even seem as if I'm yankin' your chain a bit
Or maybe the way in which I'm sayin' shit
Is playin' with you, but ain't shit changin'
It's still the same shit and Shady's still a lady killer
Since the day I went insane and then attacked the babysitter
With a potato peeler
And mushed her face into the entertainment center
It's like another plane just entered into Ukraine again
Or the Bermuda Triangle and
Attempted to make a safe descent
Awaiting anyone who ain't affiliated, it could be danger
Did you make arrangements with the gangsters 'fore you came here? And if they mention us…

Tell 'em, if they want it
They can come get that [static
I swear I love my city
I just want less [static
See me, they salute me
They ain't ready for that [static
Detroit vs. Everybody

What up though? It's the godfather Trick Trick
You either ridin' with us or gettin' rolled on
That means Detroit vs. Everybody!!
Hey, Em, let me get that instrumental
Take it down to the hood
Let the little homies get this remix crackin'!
Detroit! Okay! 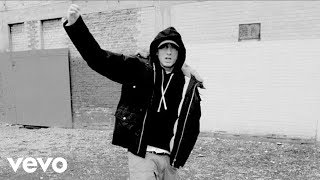 Eminem – Detroit vs. Everybody