Uraraka Ochaco [Savvy Hyuga]:
I swear I'mma be alright
I know that your worried 'cause I'm not too much to fight
That'll change this time when you see the underdogs bite
Bakugo won't be the only one to ignite
Sorry Deku but I can't rely on you
I gotta see this through with how much I have to prove
And I'm aiming for the top, it's my own goal to get to
Now I gotta go I'll see you in a few

Katsuki Bakugo [Connor Quest]:
Alright let's go then gravity girl
Hope you're ready for calamity, I'll shatter your world
Already know the champ so, you don't have to get hurt
Just give it up now, spin round and turn
On your heel or feel the full force of my sweat
That depends on if you wanna stay alive
Bet you're gunna back down, it's your last chance now
No? Huh, wеll die then

Uraraka Ochaco [Savvy Hyuga]:
Back down, nah I'm coming in hot
And I'm coming at you with evеrything that I got
Go on, blast away, but you'll miss every killshot
This won't be an easy win like you thought
Katsuki Bakugo [Connor Quest]:
Too slow, what a joke, shoulda quit the show
My reflex, the best, always miss your blows
Gotta swing in the smoke, I know you're attacking
Crap, all I did was put a hole in your jacket

Uraraka Ochaco [Savvy Hyuga]:
Thanks for the smoke, now you can't see my moves
What's wrong? A strip tease got you confused?
Seems like I struck a fuse, leaving your ego bruised
Always running at the mouth, you so obviously obtuse
Now I gotta stay low, keep giving me ammo
Yeah I know that I'm putting on quite a show
Coming back after every one of your blows
I really think you're the only one who doesn't know

Katsuki Bakugo [Connor Quest]:
How many hits can you take, bits of grit to the face
Explosions all the over the place
No way in this world I'mma let you beat me
Just cause you're a girl they think I'll go easy
Now I'm getting booed in the crowd
Even Shota told them how stupid they sound
Can't lower the guard, I've gone much too far
And I won't win 'til she's knocked out cold on the ground
Uraraka Ochaco [Savvy Hyuga]:
Look at all the mess we made
Oh wait, you might wanna check that shade
This is over for you, Kacchan I'm afraid
Releasing 'causing something like an air raid
Gotta dodge my own attacks so I get to you fast
One touch make it last, yeah I got this in the bag
Physically I may lack, but my plannings where it's at
Putting this all together for the ultimate climax

Katsuki Bakugo [Connor Quest]:
I knew you'd be up to something
Gotta think fast while the blood is pumping
Shoot from the hand like a nuclear blast
Watch every little piece crumble to dust in
One single blow
Straight to the sky, and now your missions toast
Not gunna lie that was pretty close
No more caution cause now you die, let's frickin go

Uraraka Ochaco [Savvy Hyuga]:
How could this happen, I gotta get back up I have to win this
It's more than just a competition, but my body feels stiffened
Mom, Dad, yeah I wanna make you proud
I'm sorry I failed, sorry I let you down
I can't fight I can still keep my vow
I'm tryna stand but everything is fading out
Katsuki Bakugo [Connor Quest]:
I guess it's over, Midnight's called it
She put up a fight and never thought to forfeit
Friends think she'll frail and doubt her
Let me tell you, ain't nothing frail about her 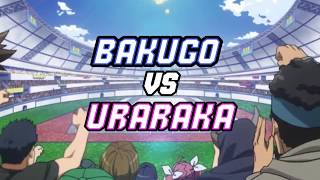